How I Won the NASA Ames Intern Poster Competition

When I won the NASA Ames Intern Poster Competition it was the last day of the summer internship program. I left without having the chance to reveal my methods for success. So this post is written by request, for all my good friends and colleagues from Ames, who are still wondering what I did to win!

This past summer, I had the opportunity to intern in the NASA Advanced Supercomputing Division at NASA Ames Research Center in Moffett Field, California. At the end of the 10-week program, the Ames Education Office announced a poster competition in which they would be hosting the intern research posters on the Ames facebook page. The poster with the most facebook likes after three days, spanning Monday through Wednesday, would be recognized in NASA Ames social media, and also at the summer-end intern symposium.

The contest began as scheduled on the morning of Monday, August 5th, but it wasn't until the afternoon when I decided to take the contest seriously. I realized that, even if it was a facebook popularity contest, campaigning for my poster was an opportunity to show pride in my work, and by extension, the work of my mentor and the rest of my beloved research group within the Supercomputing Division.

The first thing I did was change my facebook profile picture. Earlier in July, the Ames Education Office commissioned professional headshots of each intern. Many interns immediately uploaded their headshot to facebook. I didn't (but I did immediately write a script to download all the intern headshots and then make a tiled composite of my own because I needed a Gravatar - check it out on my github). My hesitation in July proved quite valuable for my self-marketing blitz. I changed my profile picture on Monday night. My facebook friends, seeing my face with the NASA meatball in the background, flocked to like it. I responded by deleting the auto-generated timeline post accompanying the change in my profile picture and replacing it with a status update in order to redirect friends' traffic from my new profile picture to my research poster.

This status update was the first of three posts that I made in my facebook campaign.

Success! The re-direct worked, and I started getting poster likes from my facebook friends. The status update appealed to people in my real-life social circles. The humor in the last line, "Your contribution will help me win an intern popularity contest," was of critical importance. It's presence alleviated the reader from the responsibility of judging the poster based on its merit - a difficult task for anyone not versed in its technicalities. It transformed the psychology of their support such that a like represented a vote of support for me (someone they definitely know well) instead of my work (something they may not know very well).

The WM Overheard page is frequented by over six thousand WM students. The theme is overheard conversations at WM, but extensions to the voyeuristic theme are acceptable if an effort is made to maintain some degree of topical relevance. But, make it relevant, and the likes will come. My appeal struck a chord with WM students who often deal with blank stares when reporting their academic institution of attendance. WM does not have the name branding of a typical state school (e.g. University of Illinois), nor the notoriety of elite private institutions. The post was the most successful of the three, as judged by the like counts that the posts themselves accumulated. (I wish I had chronological data on the accumulation of likes for the actual poster, but facebook only provides the current count and I had not thought to keep a record for myself!)

The 2013 Bay Area Intern page has over four thousand members, a vast majority being student interns working for software and technology companies. I tailored my solicitation to the targeted demographic. This time I expressed my solidarity amongst computer science majors, making a subtle reference to our shared, but contradictory, feelings of overwhelming pride and crippling insecurity that we all harbor in varying degrees when amongst real engineers and actual scientists!

Was I actually winning? Tuesday night, with only one more day remaining in the contest, I had a thought of my own. Could I write a script to show the top-liked posters? That way I could see if I was winning. But others would still be in the dark. How hard would it be to turn such a script into an actual website? Well, it turns out, not too bad. I present, Posterankr, a website showing the top-liked posters. It's all static html, it's bootstrap-y, it's completely untested, and I haven't touched it since I launched on that Wednesday morning, but I'm still proud of my first web app! 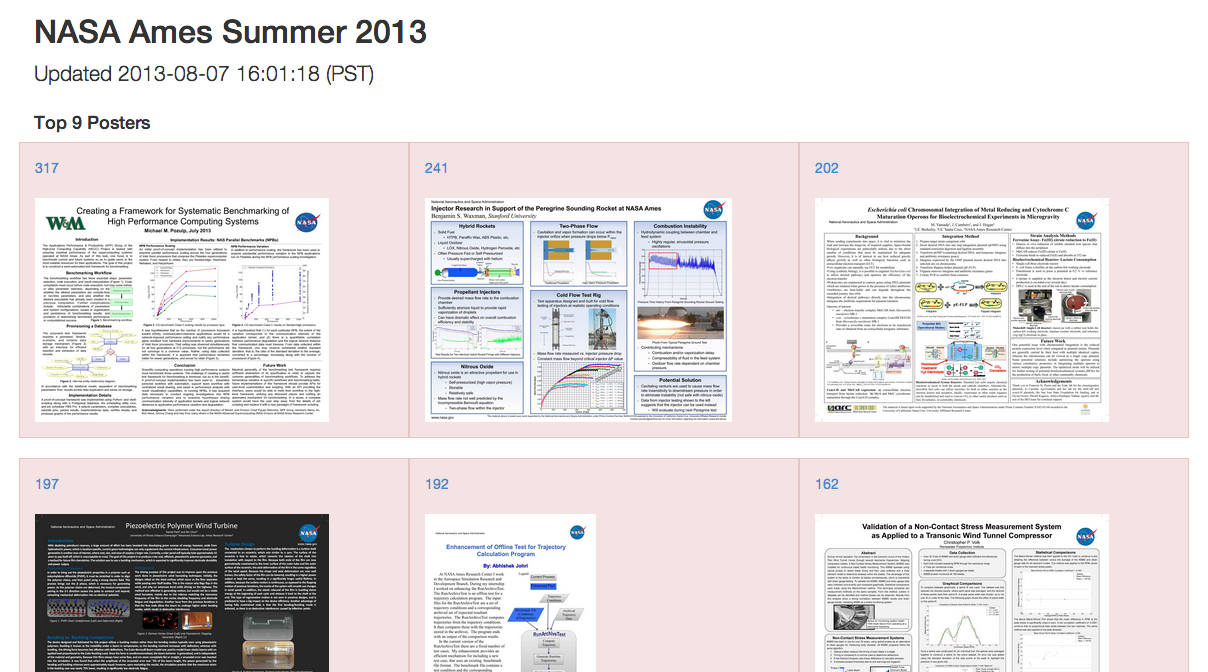 All the code is available on my github. The ease and efficiency by which I was able to harvest public facebook data was nice and fun and convenient, but also very creepy!

That Wednesday I launched Posterankr by dropping a link in the NASA Ames Summer Intern facebook page. I was confident. My experience as a long-time netizen had shown me that any web content that may be judged by likes or upvotes or stars or reposts or cookies or rainbows thrives on momentum. The psychological desire to pick web winners bears strong resemblance to the Keynesian beauty contest, in which newspaper readers are challenged to pick the most beautiful person out of those pictured, and rewarded if they can choose the one chosen by the majority of entrants. Consumers of web content tend to show such herding mentality even in the absence of any reward. Being in the like-count lead, I already had the momentum, and if Keynes' was right (he was) then all I had to do to keep it going was to provide the contestants with a newspaper. And that I did (see the aforementioned Posterankr).

On Thursday I was recognized at the culminating event, and also in NASA Ames social media, for receiving over 300 likes and winning the poster contest. I was photographed receiving a certificate signed by some administrators. I was not given time to speak, so the details of my success remained a mystery all the way until now. I hope you "liked" it!